“Damn. Lost in a forest with Pan.” That’s what

my big splashy mouth on your misfit clit,

nihilist cunt, felt like, you grunt: “Glut of smut.”

For hours I devoured; leaving you unfit

to drive. Your car slowed on the mountain road

while your son slept in the backseat. “Pregnant

and in middle school?” Even your scowl glowed.

“Homeless a month later.” With your silent

O and shayla undone you act as if

no one in Lebanon had ever been

finger fuck’d before. The divine appear

at odd times; parked on the side of a cliff

near Mount Sannine it spoke through you. No sin

Shayla is a long, rectangular scarf popular with women in the Gulf region. It’s wrapped around the head and pinned in place at the shoulders. Mount Sannine is the highest peak in Lebanon.

The night is round and black, like your throat just
as you gag me down whole. You squirm, settle

your rump on my face. Slow grind as I thrust
my tongue deeper. Hell is straight boy coital,

but as I pull out concerned you gasp: “More!”
For years we put the one in lonely; now,

we cure hate. 6-2-9. We’ve got this licked
while I suck the good parts of your soul out.

but this? So damn good. That’s what I’m about
with you: to heal from lives of scorn and shame.

Your dad finds you in the bathroom, scrubbing
make-up from your cheeks. He doesn’t approve

of, “loose morals,” he says, “and women looking
cheap, like strumpets.” Each day you remove

all signs of what we’ve done while he’s at work.
“Pull out then ram deep,” you cried two hours

ago. He talks virtue. We go berserk,
fueled by chronic and munchies. He blathers

about sin. We invent new smuttiness
each time our tongues touch. He scowls. We giggle

on the phone. “Miss you!” “Miss you more!” He’ll glare.
We’ll meet after school; all wild and reckless

with our joy. “On my face, leave your puddle
there.” It’s still the only make-up you’ll wear.

Hardcore and sublime. We found your limits.
Now comes the pushing over. As you stretched

your jaws wide, cried, “I must be fucking nuts
to let you do this.” As you gagged and retched.

As I pulled my cock from your throat. Others
have asked me if everything that you claim

is true. Who? That hurts. I’m a bad older
brother or uncle or whatever game

we play today. There’s bliss in subversion,
pleasure in chaos. What is true? You cry

only because you want to cry. “Want more?”
Pounding, filling your throat. Drunk on passion

and pain. Spunk drunk with bruises in your thigh.
We’re both sick and fucking like it’s our cure.

In some films, when someone cries out, “I’ll suck
out the poison!” the wound is always here ––

on the ankle. They make their, “cooties! yuck!”
face, so it’s sincere. Snakes never bite near

cocks, ass, underboob. Just the chaste ankle.
I like yelling, “I’ll suck out the poison!”

too –– when we’re out in public. These nipple
biting snakes are bad news when they fasten

their fangs on your inner thigh, neck, G-spot.
Since I’m eager to save you I’ll suck twice

as hard, twice as long. Odd you keep getting
bit when we go out. Does poison run hot

in you now? Others call this sin and vice.
Let them. We both know this is life saving.

with tales. On our last shift you were tied, trussed,
crotch-rope spreading your pudendal cleft wide

under your scrubs. Release, in all its forms:
from me, from work, that cum-sticky murk smell,

cirque-slush fog. I know how a nurse transforms
with bliss of rope kissing her, “pumpkin shell.”

as fruit — as the mistake we want and yearn
for, crusts our nails. In the future our past

falls from us — Call this the sort of mistake
that leaves behind only ghost-tales, rope-burn.

Dark love: filling your throat up to the balls.

This, too, is romance. Hands pulling, clenched in

your hair. Call it rough. Call it crude. Fuck-dolls

and archangels whimper at our work. Sin,

cascade down your chin. You grin. I trust you.

You trust me. Other love lives are cesspools

of hurt. To spread your ass wide. To corkscrew

into you with head thrown back, with throat bared.

Others moan of lives lived without passion

but you quiver when that word is uttered.

Suffused with such dark love our souls open,

Tasting my sex. I want sweat to drip. Eyes
rolled back in your skull. Come large. Come erect.

Come rub it. Come touch it. Come eat it. Sighs
and drawls speak in crazy tongues. You have wrecked

“don’t waste even a drop,” I know you won’t.
Impaled mouth. Hollow cheeks. Until I spray

blessings down your throat, you keep your eyes shut.
There are many talented cocksuckers

in this world, but out of all I chose you
because you’re mad and bad and you don’t slut

shame. I come each time I hear that sinner’s
voice on the phone say, “Come and get it, boo.” 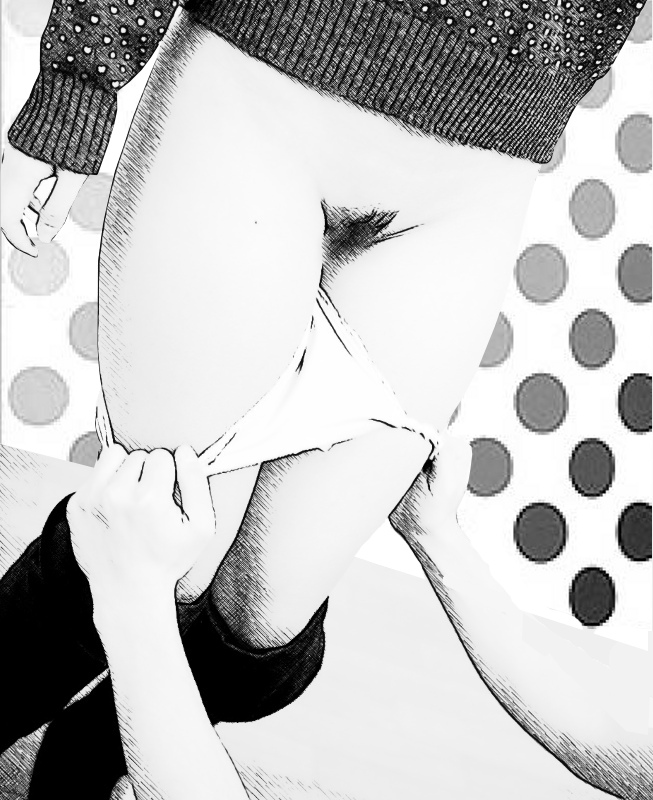