I’ve had more than just ink in my mouth. Grail
tasting like brine when you let go — you freed

your hand then leaped over the tramp ship’s rail
to drown. You could’ve called me rent boy, greed,

nephew, hint of hope. I’d have given you
my youth and made a life out of rapture

loved the despair of urban sprawl enough
to call it epic — but you did, I’m told.

You saw, “amor oscuro,” as dead weight,
a curse. The void called. No amount of rough

sex would hold you back. I tried to hold
you — but no, you let go, you wouldn’t wait.

NOTE:
Hart Crane (1899-1932) was a Modernist poet who wrote an epic-length ode to America called, The Bridge. He was also a chronic alcoholic, filled with homophobic self-hatred. While returning from Mexico, on the steamship Orizaba, he committed suicide by leaping off the deck. Dark love, or amor oscuro, is the term that the Spanish poet, Federico Garcia Lorca (1898–1936), called his homoerotic desires.

lost, my childhood friend,
you and I, naked, sleeping
in the tree’s shadow

thinking about you
even the bee’s hum, just now
sounds libidinous

spring delirium
suddenly the world and I
are one, drunk as fuck

you said, ‘I love you’
now you’re just one more shadow
stretching into dusk

I put on powder blue socks this morning.
The snow is melting. The puddles, rosy
with the sheen of gasoline, are calling
me to come on out. My final empty
cup leaves me well-caffeinated. First wine
and then tea; I’m giving up my vices.
Perhaps my discomfort at such benign
temperance shocks me? No. When the muses
whispered to me: that was shocking. College
shocked me too. Today, inexorable
as it seems, my hands do not shake. The gods
seem far away. Pictures, a quick montage
of words, make me drunk, fill my head, baffle
me that I somehow survived all these odds. 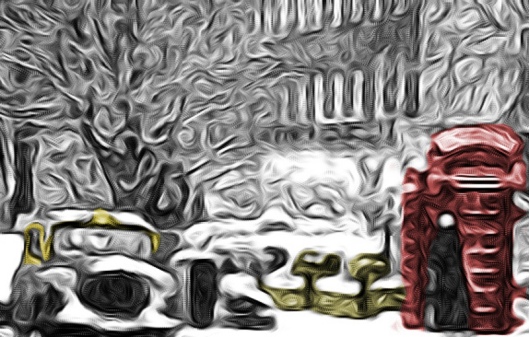 London and a diet of shrimp curry,
Southern Comfort, hashish; I can recall
my poor hip pressed up against your icy

wall. We spooned all “winta.” Your Gravesend drawl
made me giggle. We loved Aladdin Sane.

Why should I complain about love? Complain
it did not work? As if no beasts, heroes,
singers or thinkers ever once fucked up.

We don’t talk about redheaded witchcraft
or She Who Cannot Be Named. Talk is cheap.

Betrayal poems cheaper. I’m grown up.
You’re dead … so what? Once you told me you laughed
with joy as I lay in your arms, asleep. 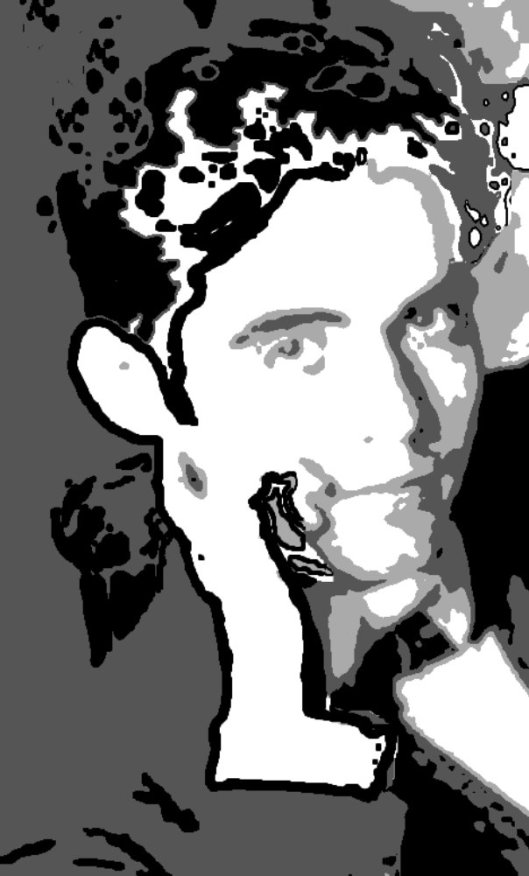 “If your girl likes rhythm and blues, look out
’cause cake’s in the house…”
— Sir Mix-a-lot, Cake Boy

“If you love her” and “then you must send her
somewhere” and “where she’s never been before.”

Do not mock “words of love, soft and tender.”

All my “worn out phrases” come straight from war.
Lovers still die. I’m “a buttercup boy
from the funny school.” By definition
I’ve been to places a 60s tomboy

hasn’t, as all children can claim. Semen
running down our chins. Still, I’ll make you glow,
mamas and papas, take you down tonight.

To where they shot Lorca. Because you mocked
everything “soft and tender.” Federico,
mi amor, I’ll burn them down with delight.
It will leave their souls horror-struck and shocked.

* The Spanish poet, Federico Garcia Lorca, was assassinated in 1936 by General Franco’s fascists for being a liberal and a queer.

* The 1960s group The Mamas and the Papas sang the song Words of Love, which I quote from in the poem. Regardless of what I say elsewhere, bless you, Mama Cass (though Papa John can bite me, jerk)

* I’ve been living with Sir Mix-a-lot’s fake ode (he of the Baby Got Back fame) to the effeminate in men, Cake Boy, for many a year now. It is equally fascinating and frustrating, much like society’s take on the fey. It might not be the very first attempt in mainstream media to talk about gay and transgendered African Americans (see: Honey Honey Miss Thang for a longer discussion) but it was one of the first I came across in hip hop. I am not African American, but I certainly identified with the cake boy motif he describes. I call this a fake ode because at the end of the song Mix-a-lot advocates physical violence against any effeminate man who might be coming on strong to a homeboy’s girlfriend. Homophobia and gay-bashing will always be crimes to send you to the 7th circle of hell in my book.

I.
Just one more kiss upon your lips causes
the blood to stir. Little light tonging flicks
like so — like so — and your hardness rises

to meet me until, with licks upon licks,
your juice starts to run. Two of my fingers
slip and slide around the edge of your ass.

I warn you: your bum will be a martyr’s
graveyard before I’m done. I will trespass
in deep — to the knuckle — in your anus.

II.
Milton warned us about this. Dictating
to his daughter the sins of male-on-male
flesh. I’m sure she spent many a restless
nightmare sandwiched between Morning
Star and Urel: male-on-male-on-female.

“When lovers moan,
they’re telling our story.
Like this.
When Shams comes back from Tabriz,
he’ll put just his head around the edge
of the door to surprise us.
Like this.”
— Jalal ad-Din Rumi
(tr. Coleman Barks)

It’s so hard to transform monogamy
into wild verse. It just sits in your mouth
like you have been gargling balls. Prissy
folk are all for it in the same way drought
loves its sunny days. This isn’t to say
polyandry is much better. In fact
it’s just the flip side of the coin; cliche
among radicals. But if you subtract
your damn ego — if you’re doing all this
for your Friends, your Others, your Shams — your verse
will be wild, child; no matter what your bliss
looks like. Do not turn love into a curse,
like those who try to define it. Freedom
looks like nothing I’ve found in your poem.

“While I was at Otherwhere, on the moors,
I met a grotesque boy, a faery’s child.
His hair was long with a darkness that lures
away women and boys. His was a wild
love, a wickedness soaked in sin,” the priest
told me when I asked if my Azazyel
had passed him by. Half-angel and half-beast;
I’ve lost my mate, my seraphic rebel.
I have been to the shamans of the Sioux
and the Sami; they’ve shown me his beastly
beauty, lost in the land of fever-dew,
drunk on hashish, mescal and peyote.
Love is grotesque. Just a taste will begin
our hunt for this drunkenness we call sin.

The most heartbreaking poem I have ever read.

Actually, all Rumi’s love poems are tragic and bittersweet. Jalal ad-Din Muhammad Rumi (September 30, 1207 – December 17, 1273) was a 13th-century Persian Sufi mystic and quiet possibly the greatest poet the world has ever produced. Legend has it that one day while in the market place he heard a goldsmith tapping on a golden bowl and the music so astounded him he began to slowly turn about in wonder. From this he founded the Order of the Whirling Dervishes.

Shams-e Tabrizi was a wandering Sunni Muslim searching and praying for someone who could “endure my company.” From November 1244 to December 1248 the two men were inseparable and then, on the night of December 5, they heard a knock on the door. Shams went to answer it and was never seen again. It is rumored that it was Rumi’s own son (or some jealous followers) who killed Shams, but of course we’ll never know.

What we do know is that Rumi spent the rest of his life looking for Shams, never to find him. He wrote thousands of poems and through them all he constantly talks of Shams returning, “When Shams comes back from Tabriz,/ he’ll put just his head around the edge/ of the door to surprise us, just like this.” Except Shams will never come back and Rumi knows it and this is why this poem breaks me every time I read it. I have no patience for certain modern Persian scholars whose own homophobia tries to explain away Rumi’s and Shams’ love as simply platonic. This is one of the greatest love stories ever told and they do a disservice to both Rumi and lovers everywhere by derogating it.

We are all haunted by the ghosts of past loves that will never return. I draw my inspiration from Rumi and his beloved Shams.

If anyone asks you
how the perfect satisfaction
of all our sexual wanting
will look, lift your face
and say,

When someone mentions the gracefulness
of the nightsky, climb up on the roof
and dance and say,

If anyone wants to know what “spirit” is,
or what “God’s fragrance” means,
lean your head toward him or her.
Keep your face there close.

When someone quotes the old poetic image
about clouds gradually uncovering the moon,
slowly loosen knot by knot the strings
of your robe.

If anyone wonders how Jesus raised the dead,
don’t try to explain the miracle.
Kiss me on the lips.

When someone asks what it means
to “die for love,” point
here.

If someone asks how tall I am, frown
and measure with your fingers the space
between the creases on your forehead.

The soul sometimes leaves the body, the returns.
When someone doesn’t believe that,
walk back into my house.

I am a sky where spirits live.
Stare into this deepening blue,
while the breeze says a secret.

When someone asks what there is to do,
light the candle in his hand.

How did Joseph’s scent come to Jacob?

How did Jacob’s sight return?

A little wind cleans the eyes.

When Shams comes back from Tabriz,
he’ll put just his head around the edge
of the door to surprise us

(It’s raining. Acid rain. Everything burns. After midnight I was naked in the window. You can count the cigarette burns on my chest. Gifts from strangers. Even my delusions are painful)