That’s the knife called: She Slits Open.
Once I sang that I’d slice open my gut,

reach in and drag out loops of intestine
if it ever got that bad. Before smut

and my sonnets I lived in Las Vegas,
crossroad of ghosts. I carried her with me

all the time: at the Shrine of the Goddess,
in class, at the gym. I was one sissy

hellbent on going out like Mishima.
Honor is queer, though: once it got that bad

strong — strong as the ghosts calling me comrade.
Stronger than this old belly-slitting song.

NOTE:
Yukio Mishima was a Japanese author and literary luminary, obsessed with beauty, homoeroticism and death. On November 25, 1970, Mishima and four members of his secret militia entered a military base in central Tokyo, took the commandant hostage and tried to persuade the soldiers there to join in overthrowing the new pacifist government in a coup d’etat. When this was unsuccessful, Mishima committed seppuku, ritual suicide by cutting open his belly. 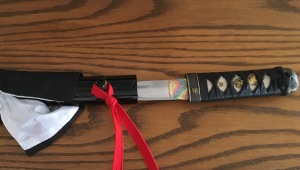 Visions of an inferno. Queer fire dwells
out there. Fire of the fallen is still fire

that loves you; down to your genes, to your cells.
I do not question what I call desire.

It’s the twist of vulgar gender that piques
me. The drive of geezerbirds and chickboys.

All that bright rich sky in a storm that shrieks
leaden control. Rebel angels knew joys

that their coup d’état brought. To rise. To romp
in flesh that we’re given. To love secrets

that fill the soul, fill up an inferno.
Let’s be messy children who love to stomp,

sing and burn; let’s be the flame that poets
dream of. This fire: make it love, not sorrow.